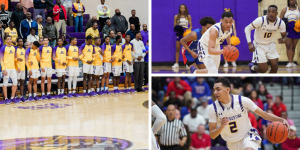 The 29-1 overall (12-0) in District 9-5A, outright champions, #2 ranked St. Aug Purple Knights, began their quest for a state title, hosting the #10 John Curtis Patriots, inside a packed St. Aug  Watson Jones Memorial Gymnasium. The first 2 matchups between the Purple Knights and Patriots, St. Aug defeated them by 8 points and 13 points respectively. The playoffs, however, tend to bring an added challenge as it’s difficult to beat a team three times in one season.

The Purple Knights had a first-round bye, so the team expected some rust and maybe jitters, as they finally were back in action.  The jitters showed early with a few ill-advised shots, turnovers, and missed rebounds, allowing the Patriots second chance rebound opportunities. The sharpshooting of junior guard Ashton Trufant was big early on as he knocked down two three’s from opposite corners of the court.  In addition, to jump shots from leading scorer, (senior) guard Jaron Pierre Jr. and (senior) forward Jaden Clark, to take a 17-7 first-quarter lead.

The Patriots were playing tough defense on Pierre Jr., so shots weren’t in abundance as they have been for him during the season, but he managed to make good passes, finding open shots for (junior)guard Nasir DeGruy who scored 5 points in the quarter, as the lead would grow to 28-17 at the half, as the Patriots got 5 points from Rashad Holmes.

Jaron Pierre Jr. finally broke free in the fourth quarter and found some breathing room scoring 10 points with two of his signature three-pointers from long distance.  Pierre Jr. is still the leading scorer with 16 points despite the defensive pressure and attention applied to him by the Patriots. Trufant added 15 points while DeGruy chipped in with 11 points, Wiltz 9 points, Clark 7 points, Walthers 6 points, and Malbrue  2 points as the Purple Knights advance to the final four semifinal round, in Division I, topping John Curtis 66-36. Darius Rocket and Jourdan Stipe, tied with 9 points each for the Patriots.

The Purple Knights will host Catholic High School from Baton Rouge on Tuesday, March 10. Tip-off is set for 7 p.m., doors open at 5:30 p.m. at the St. Augustine, Watson Jones Gymnasium. The winner of the semifinal game will advance to the championship game. 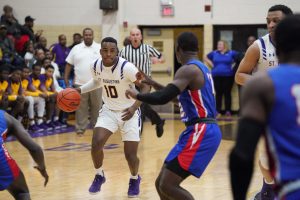 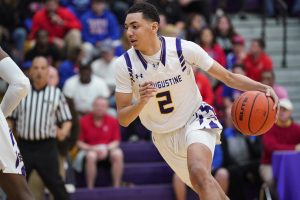 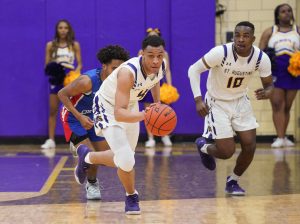