There were many reasons to be excited as the Purple Knights hosted the Jesuit Blue Jay’s, for the final regular-season home game, on a season filled with many accomplishments and obstacles, along the way to a 29-1 overall (12-0)in District 9-5A, record. After starting the season 6-1, the Purple Knights would go on to win 23 straight games. During that streak, Head Coach Mitchell Johnson would take a personal leave of absence, putting first-year Assistant Coach and former Purple Knight basketball player Deion Taylor into the lead position. During that time, Coach Taylor, the assistants and players, continued to log wins in the last seven games. Student leaders Jaron Pierre Jr. and D’Mari Wiltz kept the team focused throughout.

Pierre scored 10 of the 1st quarter 15 points, with two long-range three-point bombers, that sent the crowd into a frenzy, and the second quarter would be no different, as he continued, with two more 3’s. At the end of the 1st quarter, the Purple Knights led 15 – 8 and by halftime, the lead swelled into a 12 point lead, 28-16.

The Blue Jays did what they could to stay in the game, by attempting to slow the pace gaining seven points from Porter Litchel, but the night would belong to Pierre and the Purple Knights.

The Purple Knights would continue to dominate in the third quarter, led by the offensive display and sharpshooting of Pierre, scoring 12 points despite being double-teamed. The Blue Jay’s also came alive, scoring 15 points in the quarter, with seven points from Kyle Haupt. Proctor Litchell added 6 points as the Purple Knights went into the fourth quarter with a 47-31 lead.

In the final quarter, the Blue Jay’s had a 29 point explosion, led by Patrick Lavie with three, 3 pointers. Kyle Haupt added 9 points in the quarter with some help from Holden Hess with five points and Proctor Litchell with four points. For the Purple Knights, Rodney Atkinson showed his scoring ability by getting out in transition which led to 12 points along with seven points from junior guard Nasir DeGruy.

The final score was 67-60. Despite the Blue Jay’s efforts, the Purple Knights closed the nights as the outright undefeated district champs of 9-5A. Now the team waits to see who’ll they face. With a first-round bye, Coach Johnson prepares them for a state title run for the second year in a row.

The Friday night game in the Watson Jones Memorial Gymnasium was the final regular-season home game, giving the team an undefeated district record and title. With the team’s overall record, it could match the last time the Purple Knights only had a one-loss season, duplicating the 1995 district, state, and national championship team, coached by legendary coach Bernard Griffith. Current Head Coach Mitchell Johnson, was the captain and leader of that district, state, and national title team, in 1995.

Click here to view images from the senior night presentations and the game. 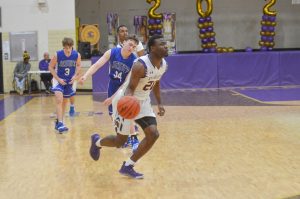 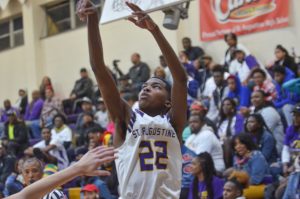 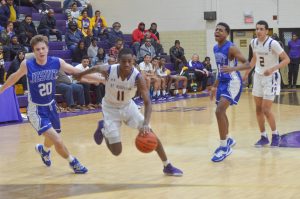 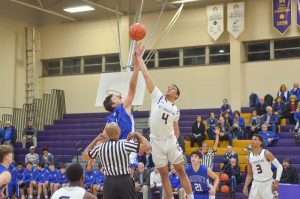