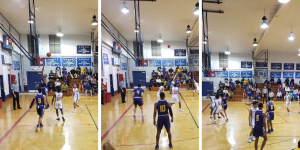 The Purple Knights 27-1 overall (11-0)in District 9-5A, traveled to face John Curtis, 4-16 overall (2-9)in district play, looking to continue the winning streak to make it 23 in a row against the Patriots. The Purple Knights seek to maintain their stronghold on the championship crown, which they can wrap up on Friday, February 21, in the Watson Jones Memorial Gymnasium, the final game of the regular season and Senior Night.

The short-handed Purple Knights only had 9 players in uniform but were never threatened by the Patriots, despite giving up 19 pts in the 4th quarter, it would still be an easy victory for the Purple Knights 66-53. At the end of the first quarter, the lead was 18 -10, which would grow into a halftime lead 34-21, after 16 pts. were scored in the 2and Qtr.

The final game of the regular season, the Purple Knights host the Jesuit Blue Jay.  Senior night presentations will take place during halftime of the junior varsity game onFriday, February 21, at 6:20 p.m.