Purple Knights Official Sponsor
St. Augustine High School has named Barret L. Rey its head baseball coach for the 2019-2020 school year. Rey, who has served as St. Augustine’s athletic director for the past three years, replaces Al Robinson, who served for three seasons as St. Augustine’s head baseball coach. The Purple Knights went 17-15 overall and 5-7 in district in that span and won the postseason series in 2019.
“We are fortunate to have Mr. Rey’s caliber of talent and leadership as a current member of the St. Augustine athletic staff. Our athletic programs will continue to flourish with him at the helm,” said St. Augustine High School President and CEO, Kenneth St. Charles Ph.D. “Now he brings his exceptional baseball resume to the position of head coach. Mr. Rey has been a collegiate head coach with a proven track record of success. Most importantly, his passion for educating young men through baseball matches perfectly with the mission of St. Augustine High School.”
As a baseball coach, Rey made an NCAA Tournament appearance. Rey brought Grambling to the SWAC tournament two times and made it to the semifinals in 2009. He was named SWAC Coach of the Year in 2011, leading Alcorn State to a conference championship.
“I am excited to continue to build a championship program not only on the baseball field, but a championship program of young leaders in the tradition of our Josephite founders,” said Rey. “Coach Robinson did a tremendous job building the baseball program at St. Augustine. We will continue on the path that he laid and strive to reach even higher levels of excellence.”
Rey began his career as the assistant baseball coach at Southern University A&M, later serving as head baseball coach at Grambling State University. He then served as the head baseball coach at Alcorn State University. Rey has coached 26 players who have been recruited or drafted by Major League Baseball teams.
Along with his extensive coaching career, Rey was a stand out at Southern, University A&M, where he was a starting pitcher helping to lead the Jaguars to a SWAC championship. In 1997 he earned a bachelor’s degree in Psychology and in 2003 a Master of Science in Therapeutic Recreation both degrees from Southern University A&M.
Rey is a 1992 graduate of St. Augustine where he lettered in baseball (pitcher) and was a team captain. 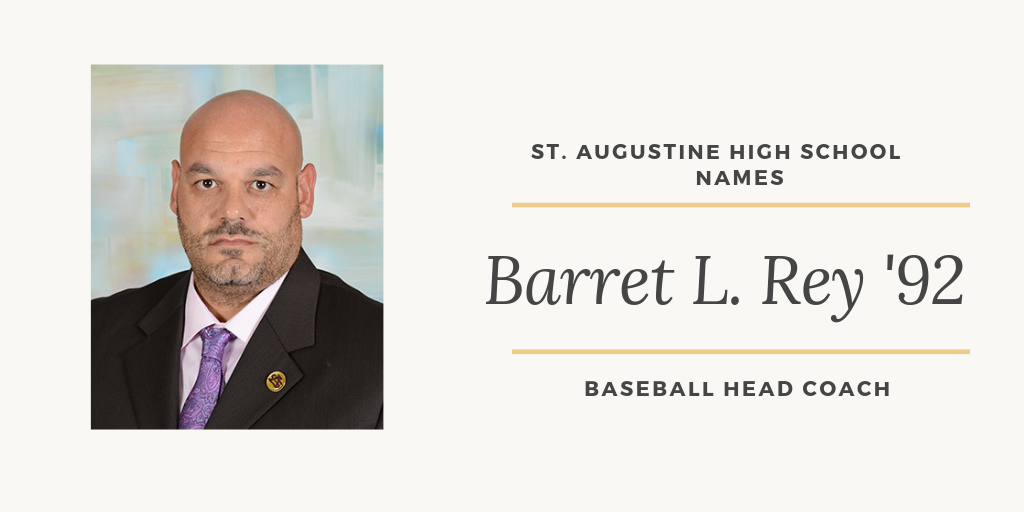