“When I accepted the head coaching position I committed to an initial 3-year agreement. I believe that the time is now right for me to retire and spend more time with my family,” Coach Jones said. “The relationships that I built at St. Augustine are special to me and I thank the players, parents, and all of the other coaches for an amazing three years. We built a football program at St. Augustine that instills a sense of pride, tradition, and discipline, and I look forward to watching the Purple Knights continue to succeed.”

Coach Jones will remain in his current capacity as the eighth-grade counselor at St. Augustine High School.

Principal Sean J. Goodwin praised Jones for his leadership on and off the field, “Coach Jones joined the St. Augustine football program when we needed him most. I appreciate what Coach Jones has done for the St. Augustine football program in terms of excellence on the field and sportsmanship. I’m also appreciative of the way he has developed our young men by preparing them for opportunities beyond high school.”

Jones, a 1975 St. Augustine graduate and Purple Knight defensive end continued his football career at Tulane University. He was the Green Wave team captain in 1978 and graduated with a physical education degree. Coach Jones has served as an educator for more than 30 years.

“I am grateful for all of Coach Jones’ contributions to St. Augustine, including his commitment to academics and discipline, and for the lasting effect he has had on the lives of our student-athletes,” said St. Augustine High School President and CEO Kenneth St. Charles, Ph.D.  “He leaves this program in an excellent position to sustain success and I wish him the very best.”

The Purple Knights completed the 2017 season with a 7-3 record and made it to the state playoffs for the third consecutive year. Under Jones’ leadership, more than 17 student-athletes continued their football careers in college and 10 current student-athletes have committed to playing football at the college level.

“Coach Jones exhibits every attribute of traditional St. Augustine football,” St. Augustine athletic director Barret Rey said. “St. Augustine owes him a debt of gratitude for taking on the challenge of building a successful football program. We are confident that he will remain an integral part of the St. Augustine community.”

The school is beginning a search for a new head coach to lead the Purple Knights. The position will be posted on the St. Augustine High school website in early January 2018. 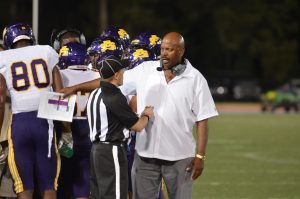 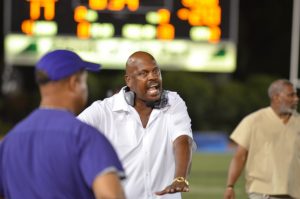 St. Augustine High School is an all-male college preparatory school founded in 1951 by the Josephite priests and brothers, an order dedicated to providing missions and schools for African-Americans in their dioceses. Over the years St. Augustine High School has built a legacy serving as the training ground for leadership through academic excellence, moral values, Christian responsibility, and reasonable, consistent discipline.  Today, the school welcomes young men of all races and religions and remains a leading secondary school for African-American males in Louisiana.
###
Purple Knights Official Sponsor