Purple Knight and elite NFL prospect Leonard Fournette celebrated his 22nd birthday by giving back to the school and teachers that helped motivate him to excel on Wednesday, January 18.

The award includes a trip to watch Fournette in a future NFL game, $1,000 each and a gift pack from Under Armour. St. Augustine students will be eligible to receive future “BUGA 5” awards. The “BUGA 5” are selected by Fournette and represent those who exemplify the traits of Fournette’s “Being United Generates Attitude” mantra. He presented five of his former coaches and teachers with the “BUGA 5”. He later addressed the football team, calling them his motivation and “second family.”

Following the event, some of our film crew students spent some time talking to Fournette. Watch the video below. 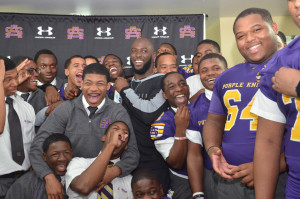