More than 400 prospects from Louisiana, Alabama, Arkansas, Mississippi, and Texas were competing to earn an invitation to Nike Football’s The Opening Finals in Beaverton, Ore., this summer.

Monjarres, a 6-foot-2, 200-pound defensive end was one of the class of 2018 eye catchers at The Opening New Orleans.

He was the only defensive end to get past Alex Leatherwood in one-on-one action and that earned him a spot in the ‘Final 5’ where he was able to win two-of-three reps against Ole Miss bound Ben Brown.

Monjarres has yet to hear from any college programs, but it may not be long now. He is a good fit as a stand up edge rusher in a 3-4 defense.

He had an impressive 4.12 pro-shuttle.

“Juan is one of the bright young defensive minds on our team,” St. Augustine High School Head Football Coach, Al Jones said. “He has been one of our outstanding players throughout our off season. With Juan’s size, effort, and ability, it’s not surprising that he stands out.”

A proud Purple Knight, Monjarres’ GPA consistently exceeds a 4.0. He competes on the Chess team and is a member of the National Honor Society. His favorite subjects are chemistry and math. Monjarres aims to pursue a career related to math and sciences.

Nike+ Football The Opening Rating Days are where players can test their athleticism and compare their scores to other players’ nationwide.

Attending one of the Rating Days gives each athlete the opportunity to get professionally Nike+ Football Rating tested. The rating comes from a series of sport-specific tests and gives athletes a chance to see their strengths and weaknesses. Athletes have a chance to measure themselves against other elite players in their class. 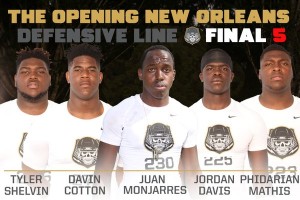 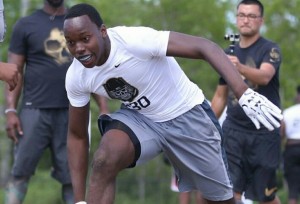 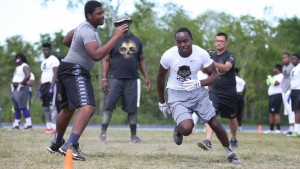 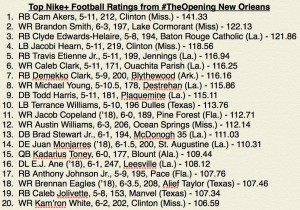