The legendary rivalry between the St. Augustine Purple Knights and the Brother Martin Crusaders is one of the most heated and competitive rivalries in the state.  The two schools have been arch rivals for decades and have always played great games in every sport in which they compete.  The rivals faced off on Tuesday, January 19 at St. Aug’s Watson Memorial Gym for the first game of their two-game district series.  The two teams previously met in the CYO tournament where the Purple Knights won by 16 points.  The Knights were once again victorious but by a closer margin with the final score 59-54.

The Purple Knights maintained a slim lead for the entire game but the Crusaders kept the game within reach.  Both teams answered each other’s scores and big plays.  Each team played tough defense throughout the night, trading hard fouls, shooting several free throws, and blocking shots.  In particular Drew Delatte, senior, of St. Augustine and Bruce Jordan-Swilling of Brother Martin prevented interior scoring by contesting and blocking numerous shots.  Devante Jones, senior, also effectively contributed defensively with steals and a crowd-shaking block on a fast break.  Caleb Daniels, junior, of St. Aug led all scorers with 24 points as he displayed a wide variety of ways to earn points.

Entering the fourth quarter down 34-41, the Crusaders continued to fight for the lead.  Brother Martin closed the Knights’ lead down to three points with less than two minutes remaining in the game.  By limiting turnovers and knocking down free throws the Knights maintained this three point lead as time ran down.  With the final seconds wearing down, Patrick Smith grabbed a loose ball and scored a layup to give St. Aug a five point lead to end the game.

The Purple Knights will enter the Friday, January 22, game 5-0 in district as they play McDonogh 35 at McDonogh 35 in a non-district game. 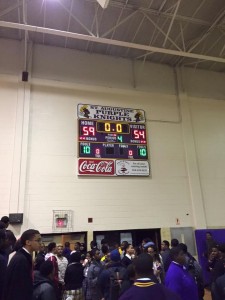 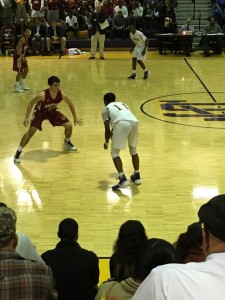 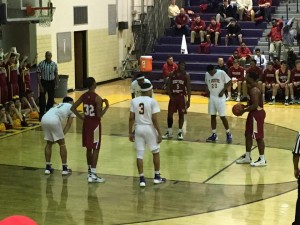 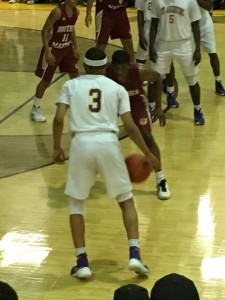 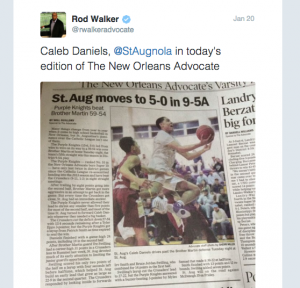